It’s Time to Bring Back In-Person Gatherings: Here’s How

“It is so great to be together in person again!”

Last month, at the Jewish Funders Network conference in Palm Beach, Fla., I heard variations of this statement over and over again. After two years of COVID, more than 500 members of our philanthropic community were finally able to meet up in person for a mix of structured programming and informal networking. It was magical!

As one of the first major Jewish organizations to hold a large in-person conference since COVID upended our lives two years ago, we have learned a lot about how to return safely to in-person gatherings at a time when the pandemic has abated, but not disappeared — a situation that may continue for a long time. In-person gatherings require more planning now than they did in pre-COVID times, but at JFN, we strongly believe that it is worth the extra effort. While we will continue to supplement our in-person gatherings with online ones, we are an organization focused on building networks and relationships, which need human, in-person connections in order to grow and thrive. Because this is a new world that presents new challenges, we thought that sharing our experience may be of help for the broader community as more of us seek to regain the magic of “in person.”

How Israeli Philanthropy Is Changing in the COVID Era

“There’s a steady rise, slow but stable, in the amount of money donated and the number of donors giving in Israel,” Sigal Yaniv Feller, executive director of the Jewish Funders Network in Israel, told eJP. “More people understand that it’s important to give, and have the ability to give.”

Historically, Israel was a developing nation whose populace had a strong tradition of volunteerism and national service, rather than a culture of financial giving. Israel’s mandatory draft, which conscripts most 18-year-olds for two to three years, continues to reinforce an Israel ethos of giving time and physical energy. As of 2020, Israelis on average donated 1% of their disposable income, as opposed to Americans, who donated 2% on average.

But there are signs that as Israel has become more affluent, and particularly as its tech sector has brought wealth to the country, Israelis are beginning to open their wallets. According to a study commissioned by the government and Tel Aviv University, Israeli philanthropy grew 43% between 2009 and 2015 in total shekels given, and native Israeli philanthropy accounted for more than a third of donations in the country.

Episode 28 of What Gives? the Jewish philanthropy podcast from Jewish Funders Network.

In Episode 28 of "What Gives?", the Jewish philanthropy podcast, Maimonides Fund COO and Sapir Managing Editor Felicia Herman talks about "geeking out" in Jewish historical archives, the value of Jewish giving circles, the impact of the pandemic on Jewish giving and more.

Resources from the JFN 2022 Conference

More than 500 people joined us from all over the world for the JFN 2022 International Conference in Palm Beach, Fla. We launched a special campaign for Jews of Ukraine, introduced a new guide to participatory grantmaking, and raised the discourse on a variety of timely topics. The packed schedule included workshops, plenaries, speakers, receptions, and dinners on a wide range of issues — and many opportunities to reconnect with old friends, meet new ones, and plan funding partnerships. In the coming weeks, we'll be sharing videos and other content (including PowerPoints from specific workshops) from the conference.

Below are photos, videos, and a variety of resources from the conference, including some resources shared by conference sponsors. We will be continuing to share videos and resources in the coming weeks.

Robots at the Seder Table? Training Ourselves to Be in Community Again (Passover 5782)

Tell me honestly: Are you anticipating your Passover seder with excitement or dread? Do you really want to meet all your long-lost relatives, or would you rather have seder with only the three people you like best? In the amusement-to-annoyance scale, where are the obnoxious comments of Uncle Mort going to land? What’s your patience level for those that say the seder is “too long” or the classic “can we eat already?”

If you find yourself less inclined to deploy the patience needed to deal with other people, you are not alone. In fact, you are part of society-wide decline in the ability, opportunity – and desire – to connect with others. Let’s face it: We do miss physical proximity, but we also understand, more keenly than ever, what Jean-Paul Sartre meant in his famous phrase “hell is other people.”

Speaking to JI on the sidelines of the recent Jewish Funders Network Conference in Palm Beach, Fla., Ghobash, 50, who is a well-known diplomat, businessman and author in his own country, will soon be at the forefront of interfaith dialogue and religious tolerance in the Vatican as his country leads a historic process in the Arab world to encourage peaceful relations with the world’s only Jewish state.

Ghobash explained that because the UAE is a “leadership organized society,” everyone looks to the royals for guidance, and his fellow countrymen have chosen to embrace the historic steps taken over the past two years by Sheikh Mohamed bin Zayed Al Nahyan, the Crown Prince of Abu Dhabi, better known by his initials, MBZ.

Read the full article by Ruth Eglash in The Circuit

From Findings to Funding: A Course for Grantmaking Professionals

JFN's Grantmaking Professionals Exchange is pleased to offer a second cycle of "From Findings to Funding: Using Research Evidence in Philanthropic Decisionmaking," a three-part Zoom course for grantmaking professionals at JFN member organizations. The first round was offered in the fall of 2021. Learn more below and download more information here. The course is offered free of charge, and applications are due by April 22. 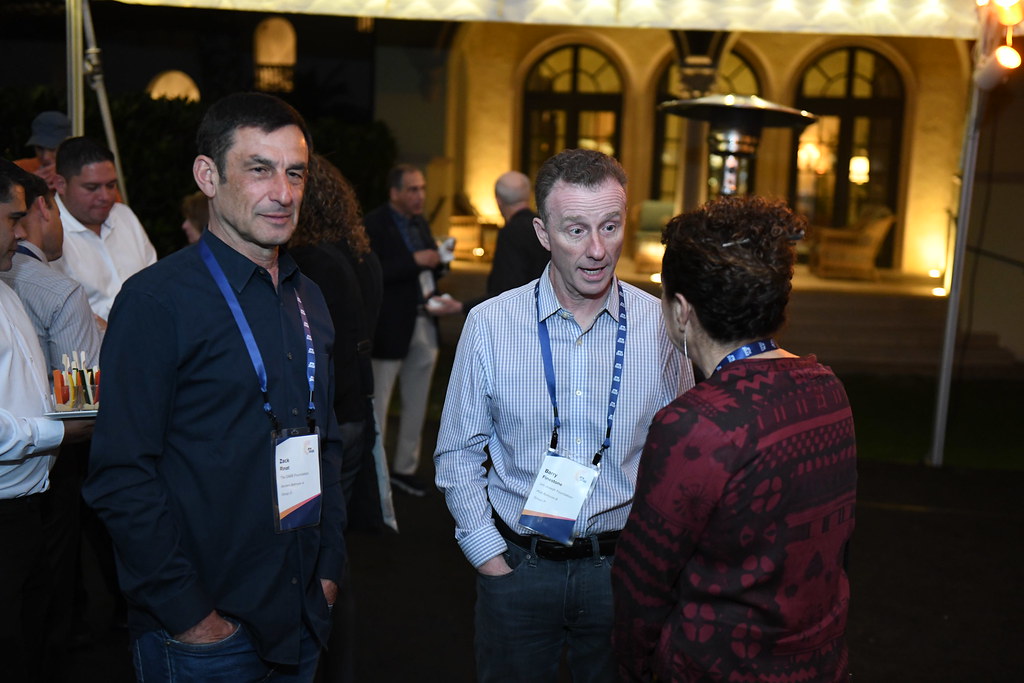 More than 500 people joined us from all over the world from March 27-29, 2022 for our first in-person conference since 2019. We launched a special campaign for Jews of Ukraine, introduced a new guide to participatory grantmaking, and raised the discourse on a variety of timely topics. The packed schedule included workshops, plenaries, speakers, receptions, and dinners on a wide range of issues — and many opportunities to reconnect with old friends, meet new ones, and plan funding partnerships.

Scroll through our curated collection of the best photographs. If there is a specific thing you are looking for, email JFN Communications Director Julie Wiener, who can search the full archive for you.

In the coming weeks, we'll be sharing additional content, including videos.

If you attended, be sure to fill out the evaluation. If you live in Texas, any of the states to the west of it, or the Canadian West, there's still time to sign up for our next gathering: Be the Story. And save the date for next year's conference March 19-21, 2023 in Phoenix, Arizona.

How Jewish Funders Are Mobilizing to Fight Climate Change

That level of concern shows up in Jewish philanthropy, as well. There is a large and growing ecosystem of Jewish donors prioritizing climate change, motivated by a combination of care for their communities, concerns over inequality and suffering, and any number of other core Jewish values. And those involved see it as a critical cause that others should be taking up, one in which Jewish voices have a unique role to play.

“The Middle East is like a picture, with Israel and other countries, the Emirates, Bahrain, Egypt, Morocco and Jordanian in the frame, but the picture is not complete without the Palestinians,” said [Israeli Minister of Regional Cooperation Esawi] Frej, who was in West Palm Beach, Fla., last week to attend the Jewish Funders Network Conference.

Read the full article by Ruth Eglash in Jewish Insider.