How Does the New Media Landscape Work?

How Does the New Media Landscape Work?

Part 1 in Strategic Communications: A Blog for the Perplexed, a JFN blog series in which communications experts answer questions from Jewish funders on how to use strategic communications to further their philanthropic missions.

This installment's question is answered by Hasdai Westbrook and Jo-Ann Mort of Maximum Impact, a joint initiative created by experienced communicators with knowledge of the philanthropic and Jewish world to provide strategic communication services specially tailored for foundations and other mission-driven organizations.

Q: The new media landscape is confusing. Should I devote my resources to traditional methods like press releases and trying to get in the newspaper, or should I be focusing on digital and social? How does it work and what's the best way to use it to further my mission?

The power of social is not a new concept for Jews. Think of the Passover seders we recently attended with our families and friends — sharing in the telling of the story as one person after another read the next passage of the Haggadah, invoking the wise but conflicting interpretations of sage commentators, asking and answering questions together. Social media has reshaped the landscape of communications and impact, but it’s terrain you might know better than you think.

If there’s one thing to understand about how media has fundamentally shifted the way we function today, it’s precisely that transition to a communal, participatory model. Today, all media is social media. Most people get their news from friends, deciding which stories to read or view based on what those they are connected to post online. And perhaps most importantly, how people react via social media often determines what the next chapter of the story will be. That’s why your programs and grantees will only be able to achieve maximum impact if you can successfully engage through digital storytelling and building online community.

While the shift has been dramatic, some things haven’t changed. As was true when traditional media was the only way to communicate, it’s best to start by considering your goal and working backwards. What do you want to achieve? Who do you want to reach? What do you want your message to be? By answering these questions, you will be able to decide how best to use social media. There are certainly many ways to do things wrong in the new digital media landscape, but there isn't only one way to do it right, and part of the power of this new set of tools is that they allow you to express your organization's unique voice and values, and harness your own particular strengths like never before

Here are a few projects that despite being quite different from each other were able to do exactly that through inspired storytelling and empowering online communities to shape and share those stories:

The Great Schlep encouraged young Jews to visit their “Bubbies and Zaides” in the swing state of Florida to dispel misconceptions about presidential candidate Barack Obama. With a clever, engaging video from comedian Sarah Silverman and by targeting a strong emotional bond that so many Jewish people have in common and resonates instantly, the campaign garnered millions of views and shares. Ultimately, this wasn’t about getting people to fly down to Florida but about inspiring meaningful conversations with loved ones about the future of the country, and the hundreds of thousands of people who downloaded the campaign’s talking points show that it worked. The most successful efforts to engage through social and digital media always provide the person reached with a way to become part of the conversation or take action to create a greater impact.

Social media platforms like Facebook and Twitter, and digital video channels such as YouTube and Vimeo offer powerful tools for shaping and sharing compelling narratives. But creating an engaging frame and strong emotional connections that move your mission forward comes down to the same age-old craft of storytelling that animates our best-loved and most timeless legends and fairy tales. And sometimes a fairytale is just what’s called for. Social venture VocaliD seeks to literally give voice to the voiceless by providing tailored digital voice simulations to those who are speech-impaired. Currently, a person who can’t vocalize only has a few generic options such as the monotone "Stephen Hawking" voice. To encourage the public to help solve this problem by sharing recordings of their voices to a "Human Voicebank," VocaliD created the online fable of Goldivox — a little girl unable to speak on her own searching for a voice that is "just right" for her. This irresistible story resonates deeply through a cherished narrative while cleverly shaping it toward the specific ends of the organization and its campaign. The work and importance of social impact efforts are often expressed in numbers and abstract ideas, but it is characters, story lines, and human emotion that move audiences most and galvanize communities.

We began with one of our most powerful stories — the exodus and escape from slavery to salvation that has inspired us for thousands of years. This year, San Francisco-based organization The Kitchen set out to reinvent that narrative so as to bring it to a broad new audience of younger Jews. “Hello Mazel” is a Seder in a box featuring a reimagined Haggadah and tasteful twists on the familiar Passover plate, a kind of care package of “Jewish awesomeness” delivered right to your doorstop or to anyone who might need it. And while a lively video was created for the project and the branding is vibrant and appealing, what’s been most crucial to its success is that like the Seder, the whole effort has been communal and participatory from the start. Rather than only bringing in the people it was intended for as a passive audience at the end of the process, The Kitchen chose to create a Kickstarter campaign to fund the creation of “Hello Mazel.” In doing so, they were able to activate a community of enthusiastic supporters who wanted to see the project succeed. The combination of online fundraising platform and social media campaign was wildly successful. They set out to raise $18,000; so far they’ve raised $150,000 and counting.

“Hello Mazel” is a physical box, filled with things to hold, touch and taste. Like the Great Schlep with family, or Goldivox with something as fundamental as one’s voice, its success goes to show that getting social media right isn’t just about virtual connection but about inspiring tangible real-world experiences through the power of digital communication. Social media is a tool to bring people closer whether online or in person. Learning to wield it effectively means more people will care deeply about what you do and what you offer, empowering your mission on every level. Here’s a few tips to help make that happen... 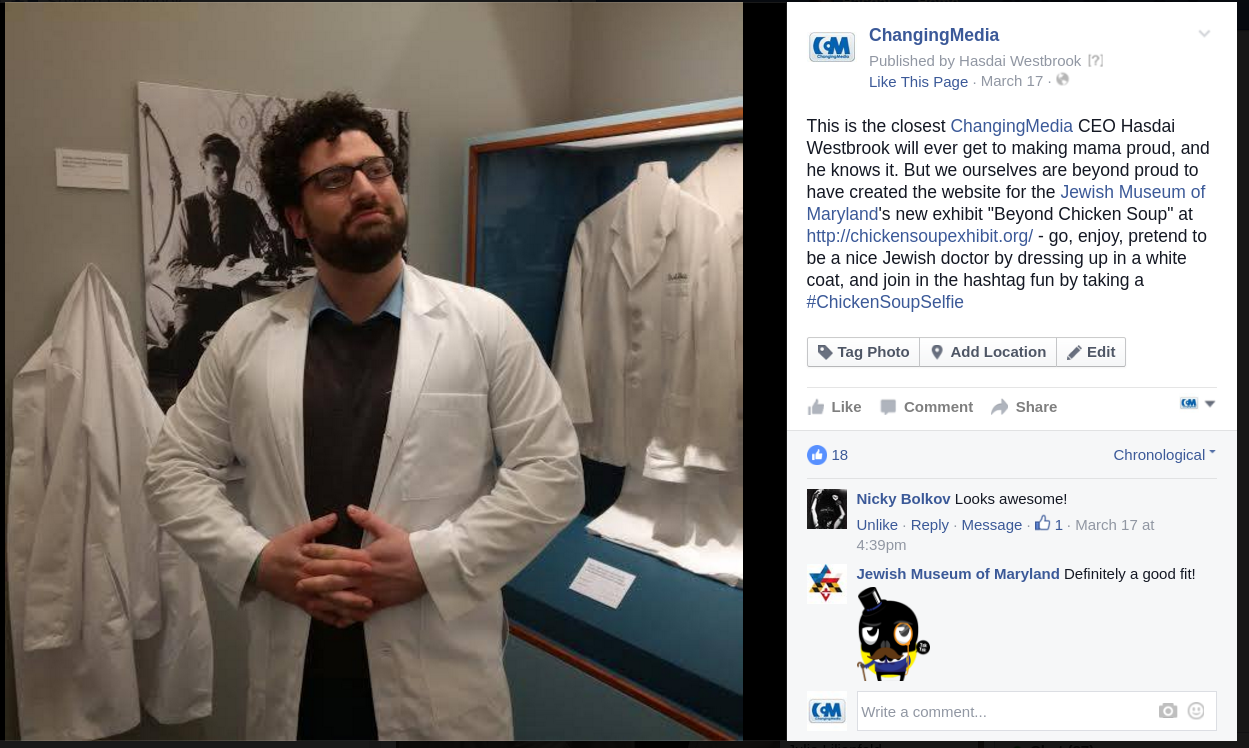 Produce content that's useful and meaningful to your audience, and that they can join in creating. The importance of an action to take and something to share is crucial. The people you reach need to feel that they are part of the discussion, co-creators and co-authors who can add their voices and stories and encourage others to do the same. That's how you harness the "social" power of social media - its inherent connectivity and the human desire to share.