Israeli-Arab Education is a Jewish Issue

On February 6, JFN and IATF co-hosted a breakfast with Professor Manuel Trajtentberg, chairman of Israel's Council on Higher Education's Planning and Budgeting Committee, to discuss how education is an Israeli strategic priority and what American funders can do to help. JFN member Michael Hirschhorn shares his thoughts below.

The morning with Professor Trajtenberg -- an unmistakably proud Israeli, through and through! -- opened my eyes yet wider. For me, most powerful was the fundamental frame Trajtenberg put around the discussion: That Israeli-Arab education is a Jewish issue.

With a bang of hand on table, Professor Trajtenberg stated loud and clear his belief that equal access for Israel's Arab citizens -- in this case, equal access to higher education -- is a core Jewish concern, not just a minority-rights advocates' issue or an internal matter for Israeli-Arabs to fight for. 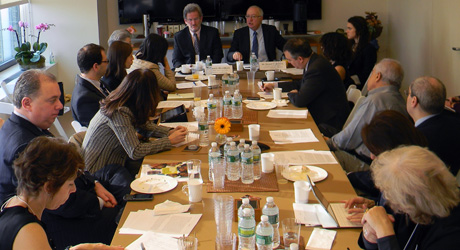 More broadly, I was moved when Professor Trajtenberg suggested that the economic and civic well-being of Israeli-Arabs needs to matter to Jewish people around the globe, not just in Israel. This, he believes, is one of but a handful of issues that will ultimately determine the long-term "success" of Israel.

I went into the morning of course aware of educational disparities for Israel's Arab citizens, but I knew little of the depth and nuance of the problem at the university level nor of sizable initiatives recently launched by Israelis to address this head on.

In my hat as board chair of the Jacob and Hilda Blaustein Foundation, this hit a chord. The spark for me that morning was our need to add education for Israeli-Arabs into the mix of our ongoing priority-setting around how to make the biggest difference with our limited grantmaking dollars. One of our trustee committees guides our grantmaking dedicated to bolstering the rights of Israeli minorities -- Jewish and non-Jewish. I'll reinforce Professor Trajtenberg's message with my cousins, siblings, aunt and uncle. I'm not sure though if I'll feel as comfortable banging the table for emphasis!