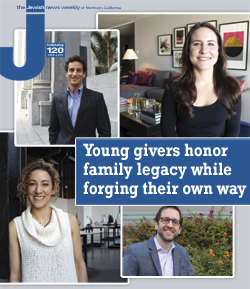 A new J Weekly cover story examines how young Jewish funders are handling questions of legacy, heritage, and individual identity in their philanthropic and Jewish lives.

J. spoke with five such children, all of whom have strong Jewish identities and solid commitments to giving and philanthropy. While their style and orientation may differ from their parents and grandparents — wanting to be hands-on, giving to different causes — these donors are also carrying on their family’s legacy to the Jewish community and prioritizing many of the same causes and organizations...

...There are a number of important ways that values about giving have changed for Jewish donors over the last generation or two, according to Andrés Spokoiny, president and CEO of the New York-based Jewish Funders Network. In addition to being more technology savvy and more connected through social networks, young Jewish donors don’t give out of a sense of obligation — or guilt.

“There was a time when you gave to the federation, you gave to charity. That’s what Jews do; you don’t question,” Spokoiny said. “That’s gone.”

Today’s young Jewish donors are motivated by issues that are important to them, both inside and outside of the Jewish community, but they aren’t loyal to organizations the way that their parents were, Spokoiny said. Legacy organizations certainly can’t count on young Jews to be donors for life, he said. Furthermore, younger Jews may have a different attitude about supporting Israel than their parents, and rather than seeing Jewish identity through the lens of persecution may see themselves as privileged to grow up Jewish in America.

“Much of the secular giving that the older generation did was to gain social acceptance,” said Spokoiny, referring to large gifts 20th-century Jewish philanthropists made to hospitals, museums and universities. “The younger generation doesn’t feel that integration anxiety. … Their outlook is much more cosmopolitan and universal. They integrate the Jewish and the non-Jewish in a much more organic way.”

And yet when it comes to attitudes toward giving, legacy donors from families with a strong philanthropic history stand apart from their peers who do not come from that background, Spokoiny said, and their values and practices are more in line with the traditions established by their parents and grandparents.

“When younger funders are engaged in the family philanthropy, they also develop a respect for the family legacy,” Spokoiny said. “I work with a lot of funders who say, ‘I want to do my own thing, but I also want to respect what my grandfather did.’ This is not a revolutionary generation.”...