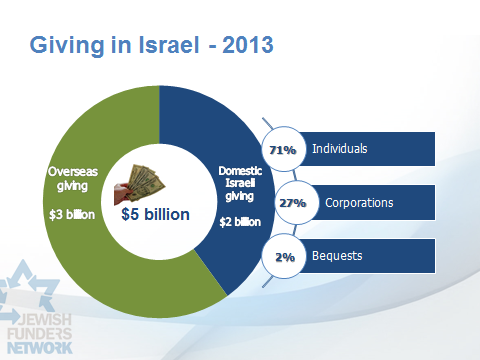 Writing on the blog of the Jewish Communal Fund, Tamar Snyder discusses a presentation at JCF given by Sigal Yaniv Feller, Director of Advisory Services at JFN Israel.

JCF fund holders had the opportunity to learn more about Israel’s growing philanthropic community last week at a Lunch & Learn with Sigal Yaniv Feller, the Director of Advisory Services in Israel at Jewish Funders Network. Sigal’s insightful presentation took fund holders on a journey dating back 70 years ago through the present day, focusing on the dramatic shift happening in the field of philanthropy within Israel.

“Building the country” was the focus of philanthropic efforts during the first four to five decades after the state of Israel was founded. Charitable dollars flowed primarily from the diaspora through intermediaries such as the Federations, Israel Bonds, and Jewish National Fund. There was a strong sense during this time that Israel was the collective responsibility of the Jewish people, and the vast majority of charitable funds helped to build the infrastructure of the nascent Jewish country. As more diaspora Jews began visiting Israel and forging personal connections, they began to direct their giving somewhat randomly, donating to whatever cause struck their chord emotionally.

In the last 15 to 20 years, the country has gone through a period of privatization. Along with the growth of wealthy individuals and waves of aliyah came a growing socioeconomic gap.

This past decade has seen a shift from nation-building to society building. Known within Israel as the first “Exit Decade,” the growing high-tech industry resulted in more wealth flowing into Israel. It is estimated that more than 10,000 millionaires live in Israel today, representing 3.8 percent of the population. [1]

Among the wealthy who are venturing into philanthropy, many have taken the MONGO approach: “My Own NGO.” As a result, there are 36,000 registered non-profits in Israel. Yet only 13,000 have the “nihul takin” designation, meaning that they are independently audited and display proper management. Only 5,200 have the 46a designation, which is very difficult to attain. 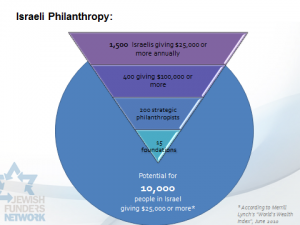 Currently, there are approximately 1,500 Israeli funders who give more than $25,000 annually. Why so few? Several reasons, chief among them the Israeli mindset that this is the government’s responsibility. Also, many Israelis feel that they do plenty, including paying high taxes, serving in the army and being on reserve duty. There are also fewer charitable role models in Israel, though that is changing. Philanthropy is not a defining characteristic of the elite. Those who do give are often criticized for having a political agenda. In addition, the tax incentives for giving are minimal as compared with the U.S.

Most people living overseas think that most of the funds for Israel’s nonprofit sector come from overseas, but that’s no longer true. Overseas giving accounted for only $3 billion out of the $5 billion nonprofit sector in 2013 in Israel. In fact, 64 percent of the giving in Israel is from households that give less than 100,000 shekels (about $26,000) per donation (each gift averages $85). 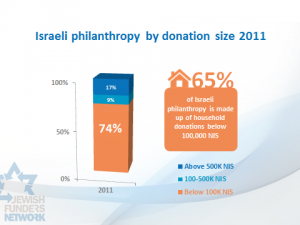 Sigal encouraged fund holders to think about the charitable causes they care about here in the United States and consider supporting those causes in Israel, as well. She recommended working with organizations like Jewish Funders Network Israel, which provides counsel to overseas philanthropists who are interested in making a difference within Israel society, as well as utilizing resources such as GuideStar Israel and Midot to better evaluate Israeli charities for effectiveness.

As part of Jewish Communal Fund’s exciting new partnership with JFN Israel, JCF fundholders will have the opportunity to participate in JFN’s educational events in Israel and benefit from a range of JFN philanthropic advisory services related to giving within Israel. To learn more about this partnership, please contact Ellen Israelson ([email protected]).

Tamar Snyder is the Director of Brand Marketing & Communications at Jewish Communal Fund. She welcomes your feedback; email her at [email protected]