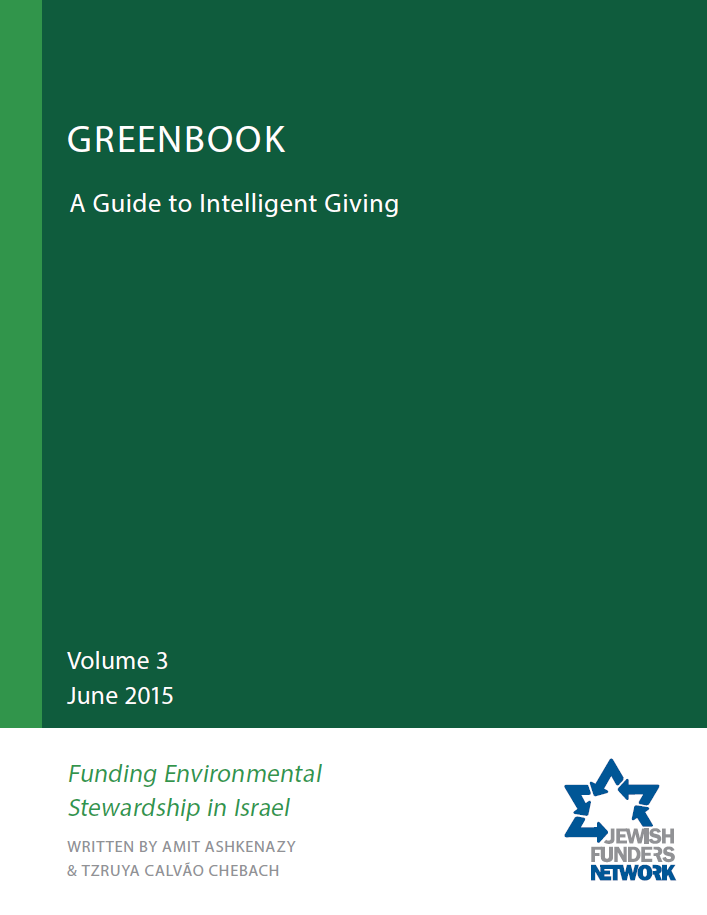 New York, August 4, 2015 — The Jewish Funders Network and an anonymous foundation today released a Greenbook on Funding Environmental Stewardship in Israel -- the third installment in a series of guides intended to help funders optimize the impact of their giving.

Where images of Israel as the land of milk and honey in a place where the desert is made to bloom endure, another reality exists. The country’s rapid development has created enormous pressures on natural resources, produced health problems that threaten thousands of lives every year, and has given rise to economic enterprise that adversely affect human and environmental health. In response to these challenges, a vibrant, yet fragile, social movement now works to protect the environment and to create a more sustainable Israel for all its inhabitants.

Funding environmental stewardship in Israel is not just critical in its own right, but also affords an ideal way to systemically address problems that transcend religious identities, social divisions, and partisan affiliations. Drawing from the experience of environmental activists, researchers, funders, government officials, and lawmakers, the guide outlines the scope of environmental challenges in Israel and introduces the many types of initiatives that are changing the way Israeli citizens and officials relate to the environment.

“We are excited about this new Greenbook, for its potential to strengthen this funding sector by providing a tool for funders to gain a more comprehensive understanding of the field, make more strategic decisions, and discover more opportunities to collaborate,” said Noa Yovel Maoz, JFN member and board member of the Gandyr Foundation in Israel. “Building this funding sector not only has the potential to impact the environment and people of Israel, but it can also have a global impact as strategies developed in Israel can be shared around the world.”

Each of JFN’s Greenbooks are designed to enable funders to have better informed, and more directed, conversations, and to more quickly assess -- and tackle -- the issues that matter most to them and the broader Jewish community. Greenbooks are coupled with JFN Greenbook Salons, a series of funder-discussion groups focused on issues raised in each book. The guides also include instructions and discussion questions that funders can use to facilitate independent discussions.

“This Greenbook is being released at an auspicious time with this year being a Shmita year -- a year in the seven-year cycle when we let the land rest and renew,” JFN President Andrés Spokoiny added. “It’s fitting that as we allow the land to rejuvenate, this Greenbook is released with the aim of rejuvenating and growing a stronger environmental funding sector in Israel.”

Please visit www.jfunders.org/greenbooks to download any of the Greenbooks or to order hard copies.

For further information on this or other Greenbooks, email Ruthie Rotenberg, Director of Peer Networks & Special Projects at [email protected].