Making a Difference on Inclusion 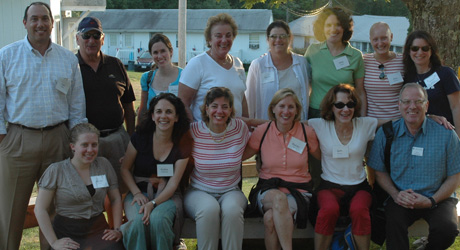 Last summer, in the middle of camp season, a group of funders from JFN joined with the Foundation for Jewish Camp to take a tour of disabilities programs at camps around the northeast. For three days, we traveled and learned together, and saw firsthand the incredible work these programs can achieve.

Now, coming up on a new summer, I wanted to share with you an interesting outcome from the tour.

Back in September at a New Jersey Y Camps board meeting I informally reported the feedback of our JFN/FJC camp visit to Roundlake. I spoke about how some of the funders felt that a more inclusive environment would be beneficial to some of the more high functioning campers and how disappointed they felt in the run down conditions of much of the camp.

In the ensuing months Len Robinson the Executive Director of NJYCamps took to heart much of what was discussed and realized that making substantial investments in facilities for a program that could not provide its campers with even the possibility of an inclusive environment was not going to be in the best long term interest of the Roundlake campers. Therefore NJYCamps decided to move Roundlake which is the camp we visited in Honesdale, Pa. to a more integrative, newer setting in their Milford, Pa campus which houses four other camps. Although at present (since they are in their first phase of becoming more inclusive) the Roundlake campers will be living in self-contained bunks on the grounds of their respective age range peers. The camp will offer both self-contained Roundlake programming as well as inclusive integrated programming provided by Nah Jee Wah and Cedar Lake (two of the Milford Camps.) Lisa Tobin, the impressive Director of Roundlake that we met, will be overseeing individualised programming for each Roundlake camper so that they will be integrated for as much of the day as they can each handle individually.

Yesterday I met with Len and he explained how NJYCamps is in the middle of providing intensive staff training for all of its professional staff and is in the process of hiring its counselors with the understanding that camp will have a new inclusive element this year. Parents of all camps have been apprised of the new changes and so far the general feedback has been positive. Staff training week will have additional training that will focus on how to be a more inclusive and welcoming place for people with differences.

I am very excited about what NJYCamps are doing. I think this is a definite step forward for Jewish camping for young people with disabilities, and am so happy that our efforts are making a real difference.

Shelley Cohen is a member of JFN's peer network on disabilities and special needs.