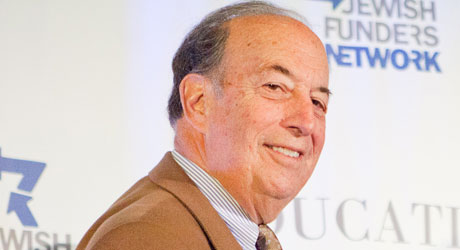 It is with great shock and sadness that we have to share the news of the untimely passing of our dear Murray Galinson.

Murray was a true pillar and unconditional supporter of JFN. He served our network as chair between 2008 and 2011, skillfully and wisely guided the organization during our leadership transition, and continued to serve as a member of the JFN Board. Murray was a strong believer in the importance of Jewish Philanthropy in making the world a better place. We are blessed that he brought his vision and leadership to JFN.

Murray was also president of the San Diego Jewish Community Foundation and was active in many Jewish and secular institutions. In all of them, he excelled and inspired.

In business, academia, politics and philanthropy, Murray was a true leader, respected and loved by all. A renaissance man who touched the lives of so many with his intelligence, good humor, calming presence and warmth, Murray’s gentleness was matched only by his passion; he advanced so many fields and leaves behind a world transformed by his life work. We are devastated to lose his energy and passion. He was, simply, a good man.

For us at JFN this is a terrible loss. We will sorely miss his wise counsel, his sharp insights, his optimism and the unique way in which he could transform a meeting by just being there. We will miss his witty humor and his unique mix of sophistication and humility, depth and down-to-earthness. We mourn today a leader, a mentor and a friend. We mourn a great man, plucked away when he had so much yet to give. We will miss the leader, and we will miss the man.

Still, we feel deeply blessed and honored to have known him and worked with him for so long. We cherish every moment spent in his company and we hope that his family finds solace in knowing what an impact Murray leaves in others. At JFN, our best way to honor his legacy is working even harder for the things he cared about and for the values he defended.

When a contemporary tried to describe the medieval Jewish sage Moses Maimonides, he talked at length about his legendary intelligence, second to none. And when asked "what was bigger than his intelligence" his answer was "his heart".

The same is true for Murray.