Press Release: The Guide to Funder Collaboration with the Government of Israel (GOI) 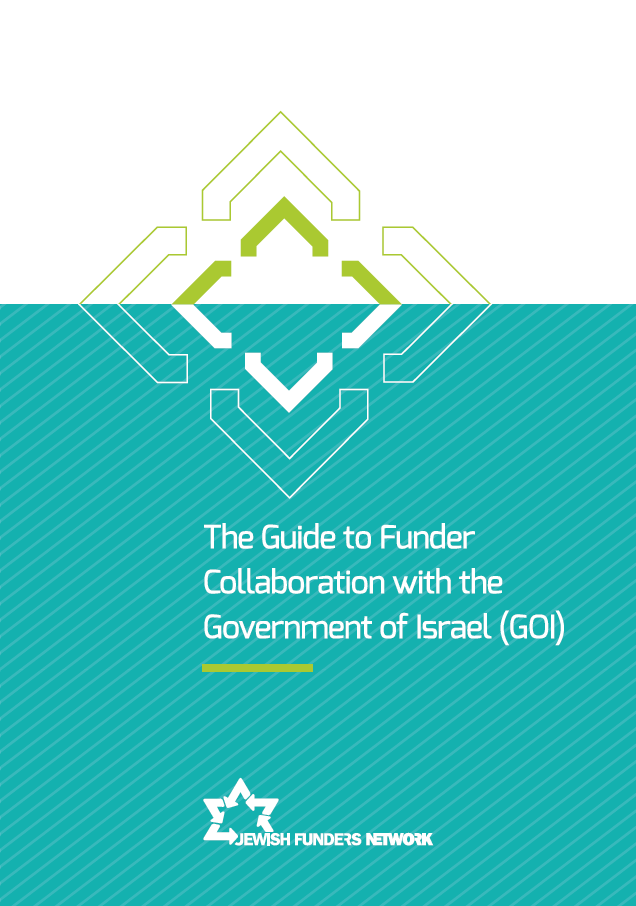 July 26, 2017, NEW YORK — Jewish Funders Network (JFN) has released The Guide to Funder Collaboration with the Government of Israel (GOI), a comprehensive overview of why, when, and how to work with Israel’s government to achieve philanthropic goals.

Partnerships between philanthropists and Israel’s government are growing more common as the philanthropic sector in Israel becomes more strategically oriented. As Israel’s economy creates both wealth and inequality that are both unprecedented in the country’s history, philanthropists active in Israel (both Israelis and foreigners with an interest in Israeli society) are moving increasingly from passive donations and reactive giving toward more proactive giving and funder partnerships. As an outgrowth of this broader trend, some funders are also working with Israel’s government to reach new heights of scale and sustainability. Releasing this guide, JFN will empower funders who are interested in partnering with the Israeli government to understand, in detail, when and whether this model is right for them—and how to pursue it most effectively.

“This guide is needed now more than ever,” says Shula Mozes of the Israel-based Mozes-Wolfowitz Foundation. “Over the past few decades, the Israeli philanthropic sector has been growing and changing the way it works. Funders from the worlds of business and high-tech are bringing private-sector thinking into their philanthropy, and they’re trying to disrupt the social sector the way they’ve disrupted their industries. This kind of funder-government partnership is one of the new possibilities they’re opening up.”

“These two sectors—government and philanthropy—need each other. They both bring something vital to the partnership,” adds Sigal Yaniv Feller of JFN Israel, the guide’s author. “Government has obvious advantages of resources, scale, and prestige. But they can’t take many risks, and they have to solve many problems at once. Philanthropists don’t have the government’s abilities on their own, but the philanthropic sector can be like the research and development departments for the country, moving faster, experimenting at small scales, taking risks, and offering focus and expertise on particular issues.”

“We knew there was a need for this guide after we released the Handbook for Funder Collaborations in 2015,” says Maya Natan, Director of JFN Israel. “That guide is a tool for funders worldwide to understand the incredible potential of forming different kinds of collaborations with one another. But as more and more funders began to think collaboratively, new and different questions arose about working with government. This new guide fills that need.”

The Guide to Funder Collaboration with the Government of Israel (GOI) was produced with support from JDC Israel, The Gandyr Foundation, and The Rashi Foundation. All three organizations are well-established philanthropic players in Israel who have experience partnering with the government of Israel.

The guide is freely available, in English and Hebrew, at jfunders.org/guide-govt