Only the Mediocre Can Save the World (Rosh Hashanah 5780)

I’ve seen the creation of the world on live TV.

No, I really have; and you probably have too, many times, without realizing it.

Remember that static black-and-white “snow” on your analog TV in between channels? Well, part of that static is something called Cosmic Microwave Background (CMB), which is nothing but the light created by the Big Bang explosion that is still bouncing around in space. Visually alluring it’s not—rather close to watching paint dry—but it’s kind of cool that today, with your own eyes, you can directly see the beginning of the world.

But you can also see its end.

A few weeks ago, I was flying over South America and, from my window I took this picture: 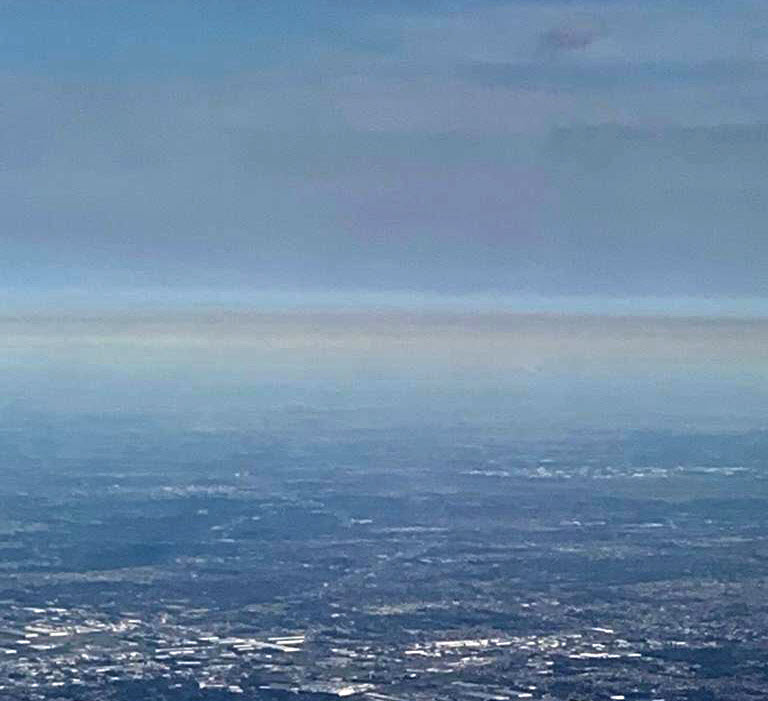 See that brown-gray horizontal line? That used to be a chunk of the Amazon. That dim line is all that’s left of millions of trees, the destruction so inconceivably immense that it can be seen from thousands of miles away.

This is not a metaphor; the Amazon produces 20% of the Earth’s oxygen. If (or perhaps I should say, “when”) it goes up in smoke, will one out of five members of your family volunteer to stop breathing? But it wouldn’t be just your loved ones; the atmospheric imbalance will produce a chain reaction that may end up obliterating life on the planet as we know it. Exaggerated? That is precisely what happened in the great Devonian Extinction 375 million years ago: a little less oxygen in the atmosphere and poof, 75% of the planet’s life was gone.

This image is, of course, particularly relevant on Rosh Hashanah. According to the tradition this is the day on which our actions are weighed. (See the Talmud Bavli, Rosh Hashanah 16b.) Those who are fully wicked are judged for oblivion; those who are fully righteous are granted life. The rest of us—most of us, probably—are what the Talmud calls “beinonim”: in-betweeners, or, the mediocre. Beinonim hang in the balance between good and bad, and our verdict is suspended until Yom Kippur, to see which way our deeds will tip the scales.

The Rambam does more here than rephrase the Talmud’s paradigm. Not only does he extend it from the High Holiday season to the whole year, but also, for Maimonides there’s a close relationship between the personal and the global. Not only are you called to tip your own personal balance towards goodness, but that of the entire world. Your actions reverberate, affect others, create chain reactions, and initiate movements.

So many things in our world today hang in the balance: the fate of our planet, for one, but also the fate of democracy, the future of freedom, the spaces of tolerance and safety that we have built over decades, and the rights that so many fought so hard to achieve. For the Jewish People, many such wobbling scales are threatening to tip towards the dark side. Our internal cohesion teeters; the relationship between Israel and the Diaspora is more fragile than ever; the resurgence of antisemitism is tilting the scales of our feelings towards a sense of insecurity and anguish, and the polarization and divisiveness with which we relate to each other are close to the point of no return. We are not at the zero hour of doomsday, but we can see it from here. Futures that used to be the stuff of nightmares are now plausible scenarios we could be confronting soon.

It’s easy, and convenient, to see these scales as moveable only by huge external forces, unrelated to us and our personal actions. I must confess to a feeling of despondency that quickly melted into apathy when I saw that dark line in the sky. I have the same sense of despair when Israeli and Diaspora Jews are talking past — and not with — each other, or when I see our community leaders gleefully joining hate-fests on social media. I feel abulia when I see Jews demonizing each other; I feel as if there’s a tsunami of bad tidings that we are impotent to stop.

But Rosh Hashanah comes to challenge that gloomy, complacent view. The seasonal texts remind us of the constant truth: we are all beinonim, teetering in the scales, and every action we take can and will tip them one way or the other.

Interestingly, on this key message of the holiday, both believers and atheists can agree: how the scales will tip depends entirely on us. For the God-fearing, the judgment of the Eternal will depend on what plate of the scales we alone load up; God will not tip the scales for us. For the atheists, of course, it’s all up to us.

We are the mediocre, but we are the empowered mediocre, because it is the beinonim, who are not yet either saved or condemned, who can influence the verdict with our words and actions. This is our moment.

Rosh Hashanah is a symbolic anniversary of the creation of the world—that mysterious day at the dawn of time that gave birth to the static in your TV and also to us—to our dreams, our hopes, and to all our conflicted magnificence. But the creation, say our sages, is not a one-off event. God “in His goodness renews each day always the act of creation”. There’s something conditional about our world, as if it was a gift that we have to earn anew every year, and every day. On Rosh Hashanah, God almost begs us to keep deserving it.

The way to do it is by acting as if everything depends on each and every one of us; by believing always that the cosmic scales — and the scales of our lives — are evenly balanced between creation and destruction; and ultimately, today and always, by pushing hard on the side of goodness, kindness, and love with all the strength we can muster.