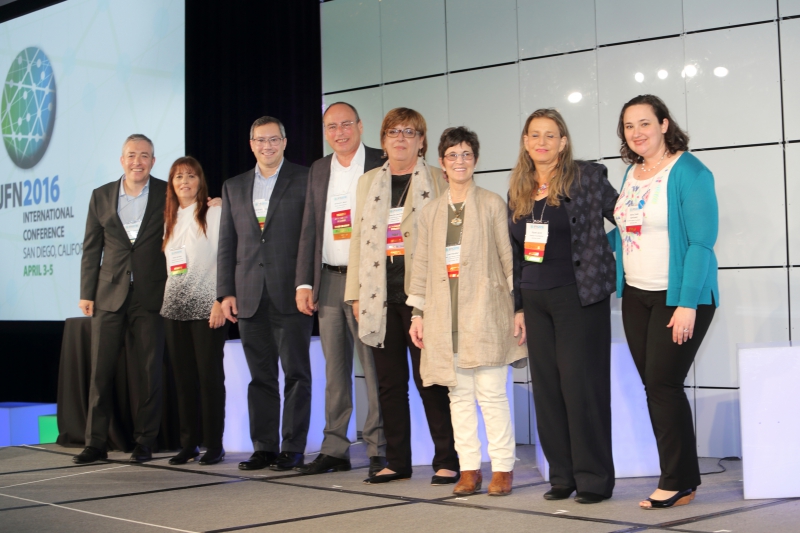 Jewish Funders Network awarded the 2016 Shapiro Prize for Excellence in Philanthropic Collaboration to the Shahaf Foundation on April 5, in a ceremony at JFN’s annual conference in San Diego. The honor recognizes the unique structure of the Shahaf Foundation as a partnership between sixteen funders from Israel and around the world, jointly investing funds and directing the foundation’s strategy, grantmaking, research, and evaluation.

Shahaf focuses its philanthropy on decreasing inequality in Israeli society by empowering the “young mission driven communities” movement, in which groups of young adults settle permanently in towns and neighborhoods in Israel’s social and geographic periphery and commit to living active community lives. Their activities include joint study, sharing a social vision, and working together to lead significant and long-term change, with the goal of creating equality of opportunity. “These young activists push for change in areas such as education, welfare, and the environment,” explains Dr. Haia Jamshy, CEO of Shahaf Foundation. “Local residents often join their efforts and together they work to transform cities and fringe neighborhoods, and make them a better place to live.”

More than 200 young communities, including more than 10,000 young adults, are active in over 80 urban locations throughout Israel, representing a wide spectrum of sectors of Israeli society, including graduates of pioneering youth movements; religious Zionist young adults; immigrants from Ethiopia and the former Soviet Union; and young adults from the Jewish and Arab sectors who grew up in disadvantaged towns and chose to build communities in their hometowns.

“What makes this partnership unique and successful is how many players come together to form a harmonious ensemble,” says Shlomit de Vries, CEO of the Ted Arison Family Foundation, a member of the Shahaf partnership. “The lay-leadership, together with the professional staff led by Dr. Haia Jamshy, make this large partnership work. All the partners are actively engaged in constant planning and evaluation. Pooling resources means each philanthropic investment is leveraged. Overhead and administrative costs can be decreased, maximizing the efficiency of our social investment.”

Tova Dorfman, CEO of the Steinhardt Family Foundation, Israel—another Shahaf partner—agrees. “As a partner, we’re a part of something which we don’t believe could’ve been done by a sole foundation or philanthropist,” she says. “Each partner brings to the table a different point of view, a different direction, a different influence on the movement. This was crucial in creating the pluralism of this movement where religious, secular, olim, veterans, Jews, Arabs, Druze, and Bedouins join forces and find their shared social values. Each partner also bring its own strengths to the table: some develop good connections with the government, others assist in evaluation methods or financial tools, some are connected to youth movements and others to Ethiopian olim. Others connect with the right NGOs in the field, with local municipalities, and more.”

Each Shapiro Prize is presented by the previous winner, and the 2016 prize was presented by Elisa Spungen Bildner and Rob Bildner, two of the 2014 Shapiro Prize winners. In addition to the Bildners, the 2014 winning partnership also included the Wexner Foundation and the Samuel Bronfman Foundation, who partnered with the Bildners to create the Foundation for Jewish Camp. “This award is about moving the field forward, and encouraging all Jewish philanthropists to question the unspoken assumption that independent decision-making and ‘going it alone’ are the same thing,” explains Spungen Bildner. “In these complicated times, we need collaboration now more than ever.”

“This prize asks the community to stop and recognize that collaboration is an essential feature of an effective Jewish philanthropic community,” says JFN President and CEO Andrés Spokoiny. “We all tend to think a lot about what funders’ goals are, but neglect the study of how funders can work together on process and structure success. At JFN, we’re committed to calling attention to the most innovative partnerships that are already happening in the Jewish community, like the 2014 winners who create the Foundation for Jewish Camp, and like the diverse and global group that created the Shahaf Foundation whom we’re honoring this year.”

The Shapiro Prize, awarded biennially by JFN, recognizes alliances of forward-thinking Jewish funders who collaborate to have an impact in their chosen fields of interest. It was established in honor of a JFN founding board member, Sidney Shapiro, who died in 2007, and who was regarded as one of the leading lights of American Jewish philanthropy. Among his many endeavors, he served as executive director of the Boston-based Levinson Foundation, and was a funder for Lilith magazine and the Coalition for Alternatives in Jewish Education. An award with Shapiro’s name has been given by JFN since 1997. The prize was formerly called the Sidney Shapiro Tzedakah Award.