Episode 12 of What Gives? The Jewish Philanthropy podcast from Jewish Funders Network.

Jay Sanderson talks about what he's learned so far from the Covid pandemic, what he's cooking, the time he met David Ben-Gurion — and much more!

The Adaptation Process of Jewish Philanthropies to Changing Environments: The Case of the UJA-Federation of New York Since 1990 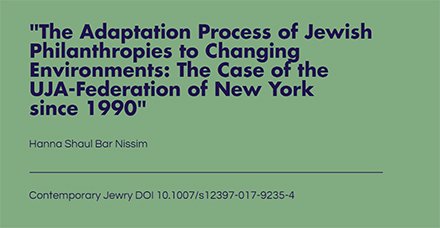 Redefining Community and Philanthropy: The Legacy of John Ruskay

The story of a Federation leader is told not only by dollars raised but by lives changed; by realities improved and hopes restored. On that account, John’s legacy is one of outstanding success. He redefined the meaning of community in a time of rampant individualism.