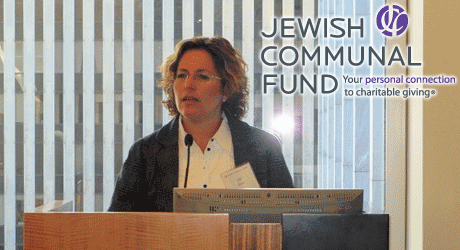 Last week, Offi Zisser, the Director of Advisory Services for Jewish Funders Network’s Israel office, spoke to a group of Jewish Communal Fund donors about the philanthropic landscape in Israel, how it has changed in recent years, and opportunities to get engaged. Here are five things you should know about philanthropy in Israel today.

5. Philanthropy is gaining steam in Israel…but it’s a gradual process.

It wasn’t until 15 to 20 years ago that a substantial number of Israelis attained substantial wealth and started to explore their social responsibility to give back to their country, Zisser says. Today there are about 1,000 Israelis giving $25,000+ annually; 300 Israelis giving more than $100,000 annually; and 150 Israeli funders who are strategic about their giving. According to a report produced by J.P. Morgan, the growth potential exists for more than 10,000 Israelis to give in excess of $25,000 a year. So what’s stopping them? There are social, cultural and structural reasons, Zisser says.

4. Israel is an economy in transition.

Israel in its infancy was a socialist economy, with a high level of government intervention. Even though the society and economy have transitioned from socialism to capitalism, from the collective to the individual, most Israelis still believe that social ills are solely the government’s responsibility. This is a cultural issue that is changing, but the change is gradual.

3. Philanthropy is not a defining characteristic of the elite.

In the United States, it is socially expected that the very rich give back to society – being philanthropic is part of what it takes to make it as part of the elite. In Israel, however, there are few philanthropic role models for Israelis to emulate at home (but thankfully, this is changing for the better).

2. There are only 15 foundations in Israel today.

There are structural constraints preventing large numbers of Israelis from taking their philanthropy to the next level. The tax incentives for giving to charity are much more plentiful in the United States than in Israel. In Israel, tax credits are offered instead of tax deductions, with a $2.5 million cap. And, there are almost no tax incentives to set apart money in a foundation for philanthropic purposes.

1. Be as strategic with your giving in Israel as you are with your philanthropy in the United States.

In closing, Offi Zisser urged attendees to focus their giving in Israel in areas that matter most to them and partner with Israeli funders who work on-the-ground and can provide valuable connections. Just as you wouldn’t give to a charity in the States without first checking their financials on GuideStar, funders should ask charities for their “nihul takin,” the most basic of financial filings in Israel, as well as full financial and governance transparency. Other valuable resources include GuideStar Israel and Midot, which is similar to Charity Navigator.