Thoughts on "Connected to Give: Key Findings from the National Study of American Jewish Giving" 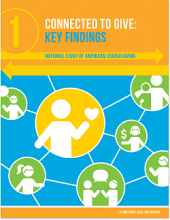 For centuries, doctors had all sorts of assumptions about human anatomy. For example, it was believed that men had fewer ribs than women, or that women had fewer teeth than men. Until the 16th century, doctors followed to the letter Galen’s description of the heart, including a fictitious set of holes that supposedly connected the two ventricles.

Why did those assumptions linger for centuries? The answer is simple yet bewildering. Nobody checked. It wasn’t until 1,400 years after Galen that Andreas Vesalius dissected a heart and showed that no mysterious holes existed. (Yes, people with that name tend to be smart).

In the world of philanthropy, organizations and foundations are, in many cases, conditioned by assumptions and beliefs. They inform our actions and influence our decisions, having direct consequences on our work. One of the most common set of assumptions we make is about donor behavior and motivation. We are bound by our understanding of what donors need and want, and like medieval doctors, we rarely bother to check.

Fortunately, that is no longer the case. Connected to Give attempts to determine the actual data behind the assumptions, the truth behind the myths and the provable behind the probable. The stakes are high --our Jewish Communal System depends on philanthropy for its survival -- if we don’t understand the needs and motivations of donors, if we don’t know donors' patterns of behavior and commitment, we are doomed to fight a losing battle for scarce philanthropic resources against increasing competition.

Connected to Give confirms some of the beliefs we had and debunks others. It is important for organizations trying to attract donors, and also for funders, as it sheds light on how our community thinks and feels about giving. It provides a fascinating glimpse at the universe of Jewish Giving and offers important clues about how to increase the philanthropic engagement of Jews of all walks of life.

Kudos to ACBP, Jumpstart and the many foundations that joined this effort. We are proud to say that they are all JFN members and partners in many of our programs and activities.

The summary of findings can be found here.