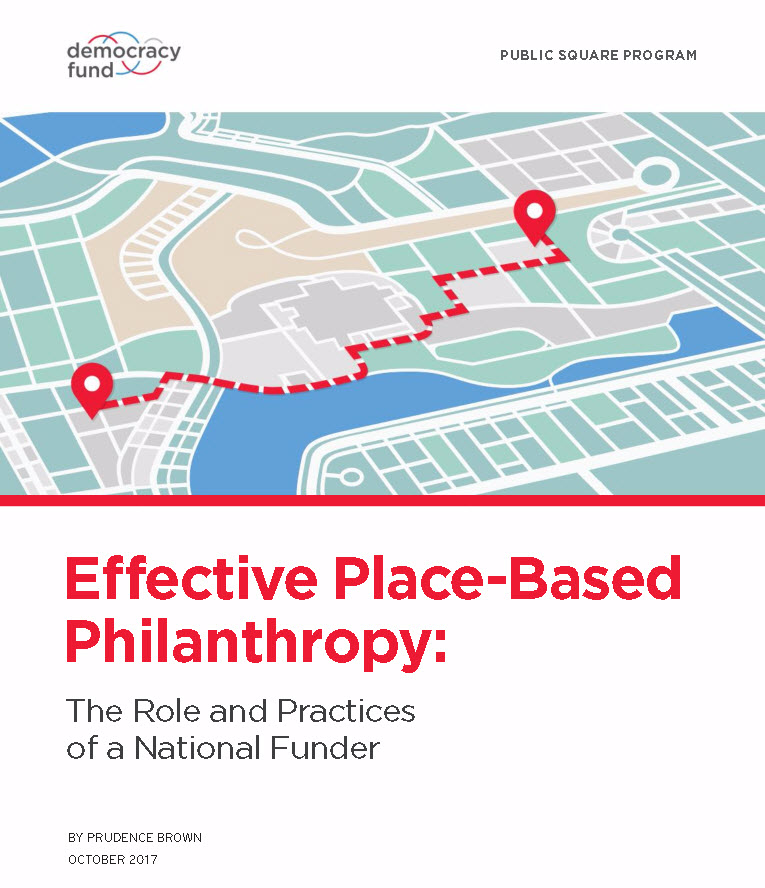 Effective Place-Based Philanthropy: The Role and Practices of a National Funder

Prudence Brown, a respected leader in place-based philanthropy, provides her insights on the roles and practices of national foundations undertaking place-based work. Drawing significantly from recent literature and Brown’s own experience and observations, this paper is organized around key questions that national funders can consider as they develop new place-based partnerships.

To Build Healthy Relationships with Grantees, Funders Need to Shift the Power Dynamics

The Democracy Fund’s Public Square Program just released a paper raising the issue of power dynamics between funder and nonprofit organizations, and even between national and local funders regarding national foundations and place-based philanthropy.

Sustained investments in employees can yield increases of up to 40 percent in profitability, stock prices, value to shareholders, and the lifespan of [for-profit] companies... Having worked with many grantmakers over the years, I know funders want to champion their grantees’ effectiveness. So why is it that nonprofit leaders feel unsupported?

Giving Away Billions as Fast as They Can

In a matter of years, a new crop of ultra-wealthy Americans has eclipsed the old guard of philanthropic titans. With names like Soros, Gates, Bloomberg, Mercer, Koch and Zuckerberg, these new megadonors are upending long-established norms in the staid world of big philanthropy.

Generational differences in religious giving may be less a result of the “generation” to which a person belongs and more a result of a person’s commitment to religious faith and practice.

Leadership Development: A Strategy Emerges, Investments are Made

An emerging leadership development strategy is taking shape and guiding critical investment decisions. The Foundation’s recent $3 million investment in Leading Edge, led by Gali Cooks, will support its growth and build its capacity as a field-building organization that invests in professional and lay leadership in the Jewish community. This gift emphasizes the Foundation’s increasing commitment to developing current and future leaders in Jewish education.

This past weekend, more than 400 leaders from nonprofit Jewish camps and other organizations gathered in Springfield, Massachusetts, for professional development and to learn strategies to help the camps they lead to thrive. The leaders were hosted by JCamp 180™, a program of the Harold Grinspoon Foundation, for its 13th annual conference.

Out and About in the Jewish Community: The Questions Jews are Asking

Shabbat shalom and have a great weekend!