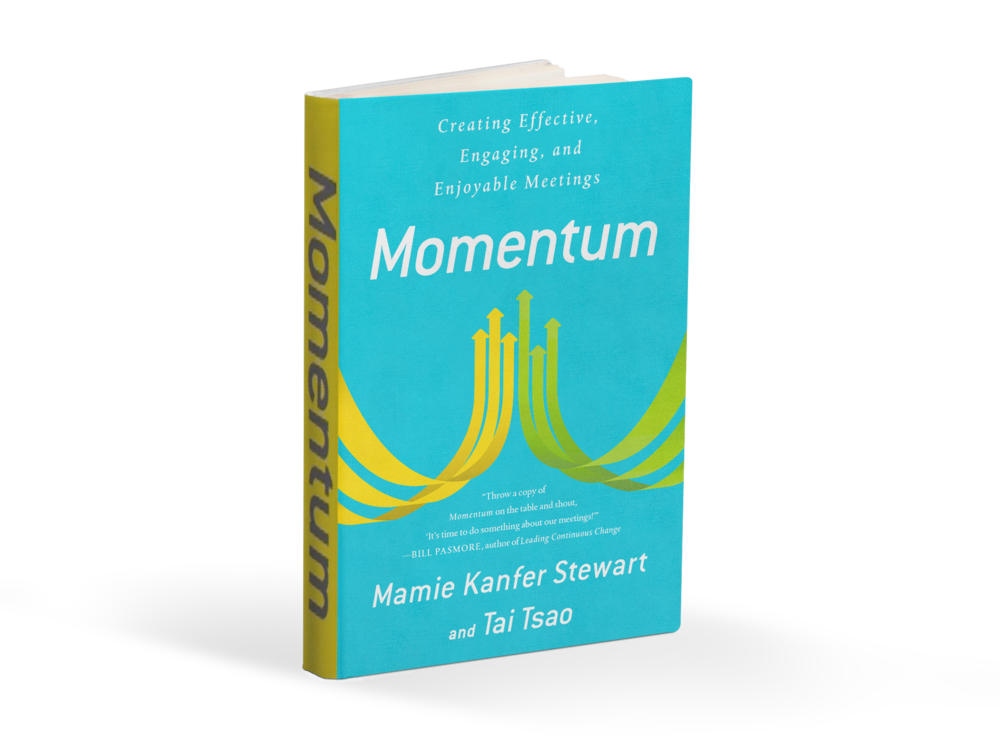 Bad meetings waste time. They often feel like a distraction from real work and are typically the result of poor planning, poor execution, or both. Thankfully, two women have dedicated their careers to improving meetings and have written this book to enable you to implement practices that will make meetings propel your work forward.

Mamie Kanfer Stewart and Tai Tsao are colleagues at Meeteor, a company focused on making meetings more productive and meaningful. In Momentum, they combine their years of experience to provide a blueprint for success, including actionable tips you can immediately implement with your team.

In a first, charity’s officials in ongoing humanitarian relief effort in Puerto Rico.

In a move aimed at strengthening protections against child abuse, four major foundations representing millions of dollars in grants pledged to require youth-serving organizations they support to adopt policies increasing the safety of children in their care.

OUR CALL TO LEADERSHIP: Hear them. Believe them. We know you have the capacity to be bold and do the right thing. We know that many of you have sexual harassment policies in place at your organizations. While a great first step, this is not enough. You cannot hide behind policies that have no teeth. Employees need to know what policies are on the books – and what specific safeguards are in place. They need to feel empowered to report harassment to supervisors, human resources professionals, or ombudspeople. They need to know that your organization has a culture where inappropriate behavior is NOT tolerated, where there will be no backlash for reporting, and where they are assured that they will not encounter the same situation again.

Give credit where credit is due... Democratize opportunities for thought leadership... Use inclusive language... Listen attentively... Support flexible work arrangements.

Protecting Fundraisers From Sexual Harassment by Donors: Advice From Experts

Combating sexual harassment and assault starts at the top, and it requires a "full-blown culture change," Ms. Beaulieu says. Supervisors and board members need to ask themselves whether they understand the nature of sexual harassment and assault. Then they need to assess whether they have clear processes for dealing with such cases as they arise, she says.

Birthright’s Move To Exclude Arab-Israelis From Its Narrative Is A Crisis — And Here’s How We Fix It.

Rather than assume that Birthright will forever ignore the complex relationship between Israel’s Arabs and Jews, I do think that they will continue to attempt to find a way to address this issue. The organized Jewish community in the US and UK provide a workable model worth considering.

The Interagency Task Force on Arab Israeli Issues (and its UK equivalent) have for years been bringing together the major forces in the diaspora Jewish community, from federations, to advocacy organizations and funders, to have a deep understanding of the realities of the situation of Israel’s Arab minority. Together, a subgroup created the Social Venture Fund, now run by the Jewish Funders Network, which finds the best and brightest organizations working on these issues and collectively gives to them.

The Nonprofit Sector’s Board Diversity Problem

People of color comprise just 16 percent of [US] nonprofit board members, nearly identical to 1994 figures, even though they represent 39 percent of [America]’s population.

Much of the tax bill impacts corporate and international taxation and while JFNA does not plan to take a position for or against the entire package, we will continue to speak out regarding charitable giving incentives and other tax provisions that impact the Federation system.

Giving, Politicking, Endowments, and CEO Pay All Could Be Affected by Tax Measure

Alex Daniels and Megan O’Neil, The Chronicle of Philanthropy

Charity fundraisers could face new challenges persuading Americans to give under the tax measure House Republicans unveiled today, with some experts forecasting a $14 billion decline in giving. The Republican plan would also make sweeping changes in how at least some nonprofits operate by loosening decades-old limits on political activities, taxing nonprofits that pay executives $1 million or more, and placing new levies on the endowments of big, wealthy private colleges.

One Year After: Donald Trump’s Presidency and American Jewry

There is a Jewish political revival underway.

Federations and the Jewish Marketplace of the 21st Century

This coming week, as federation leaders gather in LA from across North America for the 86th GA (General Assembly), it represents another opportunity to revisit the case for federations.

The Federation Files: Much Ado About Nothing [New]

Organizational transparency has moved to a whole new level. Just saying “trust me” no longer makes the grade. Federations, and they are not alone in this, need to meaningfully up their game. At the end of the day we are all stewards of donor money and need to act accordingly.

The Haaretz Investigative Reports – A Perspective

I don’t know how federation Boards and professional leaders will use the set of articles. My guess is that there will be a sense of relief and that they will deem this chapter closed. And that would be a shame, a real shame. There is much to be learned if we are willing to look at ourselves with a critical eye in a transparent manner.

How to Photograph your Teen Program

These tips are relevant to funders (and their grantees), whether or not you work with teens. Photos are a vital part of modern storytelling, and storytelling, in turn, is vital for many aspects of philanthropy: branding, advocacy, partnership-building, field-building, and more.

What does innovation mean in the field of Jewish education, a field that, by definition, is attempting to keep the past relevant, to repackage it for the modern era, rather than abandon it for the sake of some unknown future?

To Change Society, Foundations Need to Think Long-Term About Investing in Ideas

Diane Wachtell, The Chronicle of Philanthropy

It’s worth keeping in mind the need for continual investment in all forms of information by grant makers. It doesn’t take just a few grant cycles to change the conversation and influence policy. It takes donors willing to invest for the long run and working collaboratively to bring innovative ideas to life.

To avoid mindless rework, we now tell all grantees wherever possible to send us write-ups and budgets they have already prepared for other funders.

In case you missed it...

Terror in New York: A Personal Reflection on Friendship

I have written many times about my native land of Argentina, Mainly, it has been to relate traumatic memories of the dictatorship, to warn about the dangers of totalitarianism, and to stress the positive impact that community and Judaism can have in people’s lives... But last week’s murderous terrorist attack in New York, in which five Argentinians, including one Jew, were killed, made many parts of my identity hurt in unison...

The five Argentinian men who were killed were in New York celebrating the 30th anniversary of their high school graduation. They had stayed close friends for decades and they wanted to celebrate this milestone together. They were all very different; Ariel was a businessman who owned steel mills; there was an architect and a rugby coach. Their surnames show the diversity of that land of immigrants: Spanish, Italian, Jewish, Slavic...

Their story is not unique. Intense, lifelong friendships that transcend social and cultural barriers are an Argentinian specialty, like tango, recurrent currency crises, and artery-clogging steaks...