Why Jews Should Defend Liberal Democracy

Liberal democracy is in danger.

From Hungary and Poland to Brazil and Venezuela, democracy is in retreat. Even in solid democracies like Israel and America, cracks are appearing in democratic norms.

As liberal democracy is increasingly questioned, Jews face the temptation of falling into an old and dangerous Jewish habit: putting our trust in autocratic kings.

We must not fall for it. Jews, more than anyone else, must stand up for liberal democracy.

Many Jews defend liberal democracy by arguing from Jewish values, and there are indeed many links between the two. Liberal ideas like equality, human dignity, and more are enshrined in the Bible and Talmud. But we should be careful of cherry-picking sources; one can use the same texts to support tyranny, slavery, and misogyny. Furthermore, arguments from values alone may fall short for people who feel threatened.

So without denigrating the argument from values, I want to make a purely utilitarian argument: Jews should support liberal democracy because it’s the system that best guarantees Jewish safety.

This may seem obvious to some of us, but in the past, Jews often enthusiastically supported absolute monarchies. Cozying up to dictators is as venerable a Jewish tradition as gefilte fish. To explain why, we need to look back in history.

Jews and Kings: A Story of Love and Betrayal

The synagogue of “El Tránsito” in Toledo, Spain is among the oldest and most beautiful in the world. The sanctuary displays magnificent Moorish decorations and gorgeous Hebrew inscriptions. Among the verses and invocations, three words are the largest and more ornamented: “HaMelekh Don Pedro”: 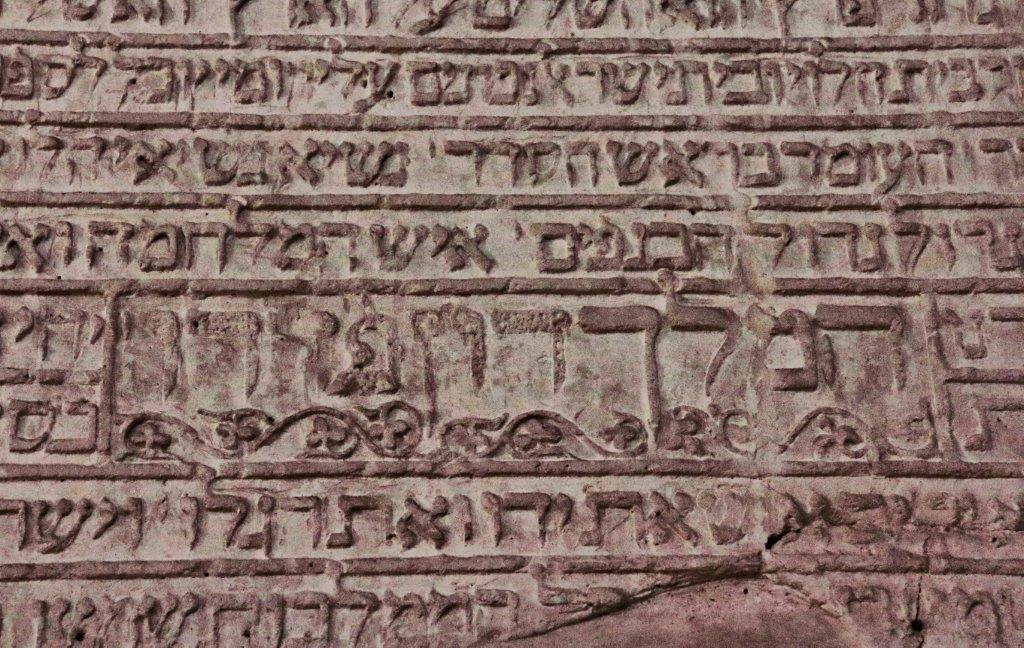 Right by the ark appears that show of obsequiousness towards the monarch. Toledo’s Jews were not alone; among the most beautiful objects of the Spanish Middle Ages is a small golden key, exquisitely engraved with the words: Dios Abriga, Rey Entrara (God will protect the King that enters). It was presented by the Jews of Seville to King Fernando.

For Jews all over Europe, being “close to the king” was a good strategy. He granted them privileges and protected them. That was true not only for Christian kings but in Muslim Spain as well, where Jews achieved a high degree of power and influence. Perhaps the best example is Shmuel Ibn Nagrela (known as Shmuel the Prince), vizier of Moorish Granada.

To be sure, everybody sought the favor of the land’s biggest macher. But gentiles were enmeshed in a broader order of relationships with fixed rights and duties: nobles with their feudal lieges; serfs with the land, tradesmen with guilds, and all Christians with the Church. Jews, on the other hand, were direct subjects of the king, sometimes even called “the king’s own property”.

But this proximity to kings never protected Jews for long. In fact, it generated more resentment of them. Kings used Jews both to indirectly tax gentiles and to take the blame. As Kings levied increasingly exorbitant taxes on Jewish communities, Jewish moneylenders (the only legal lenders in Christendom) raised interest rates in order to pay them. The kings got the extra revenue, but the Jews got the rage of the gentiles who had to pay it in the form of increased interest. Christian narratives of Jewish greed and perfidy, as well as blood libel rumors, drew from that anger and fed it.

So the populace’s hatred for Jews grew. In Christian Spain, no golden keys or synagogue inscriptions protected Jews from the pogroms of 1391 or the expulsion of 1492. In Muslim lands, Shmuel’s devotion didn’t protect his son, Yosef, who inherited his father’s post and was assassinated by a mob after the king’s death. The rabble then went on to slaughter hundreds of Jews in the streets of the city and the king didn’t see fit to intervene.

Still, Jews believed that a strong king was good for them, or at least, better than the alternative. Experience had taught our ancestors that “the people” hated them, so the democratic idea of “letting the people rule” would have sent shivers down their spines.

That would only change when modern liberal democracy began to emerge in practice.

At first, Jews distrusted liberalizing regimes because they upended the social order. Premodern people weren’t citizens in the modern sense. Christians’ primary allegiance was to the Church, and then to their feudal lord or guild. Jews belonged to their local Jewish community, and enjoyed the cohesion that came from isolation, since they didn’t truly belong in a society that was defined as Christendom (or, in the Middle East, Islam). The modern concepts of nation states with citizenship obliterated or superseded those allegiances.

Contra today’s far right and far left, who both mistakenly see nationalism as nothing but tribalistic exclusion (with the far right approving and the far left disapproving), nationalism actually emerged as a liberal movement that challenged both the universal church (Christendom, the Muslim Umma) and imperialism (one nation ruling over other nations) by insisting that each national community should rule itself, with equality being the relevant principle both within nations and among nations. Nationalism and liberal democracy co-evolved as challenged to the older, regressive orders.

The modern nation state and liberal democracy created an incredibly beneficial environment for Jews, though not without a price. The new order threatened Jewish cohesion—a problem then and even more of one now—but on the other hand, Jews were now legally equal to other citizens. The loss was real, but as Jews discovered in practice in growing swaths of Europe and America, the gains in liberty, equality, prosperity, and security were truly enormous.

And yet, during times of danger, many Jews have fallen back into the old pattern; fears of “the mob” resurface and some Jews flock to the tyrant who promises protection.

There were, for example, prominent Jews among early Italian Fascists, before Mussolini’s alliance with Hitler. Other Jews became communists, seeking a “dictatorship of the proletariat”.

I’ve seen this dynamic firsthand: in Argentina, the years before the generals seized power were chaotic, so when the military took over, many Jews welcomed them. Stability, they said, was more important than the niceties of democracy.

Such democratic backsliding did not go well. Once Mussolini allied himself with Hitler, Jewish Fascists realized their mistake. After a honeymoon period in which communists fought antisemitism, communist regimes reversed course and enacted antisemitic policies. In Argentina, Jews became a favorite target of the dictatorship. Out of 10,000 people killed by the military, 1,500 were Jewish—a share 15 times higher than their proportion of the population.

These examples are far from unique; whenever democracy and liberalism collapses, sooner or later, Jews are targeted.

Yet even today, many Jews haven’t learned this lesson.

Many Jews give rightwing populists a pass for flaunting democratic norms, simply because they are friendly to Israel. Many Israeli Jews, it seems, may prove willing to damage Israel’s democratic institutions just to protect a popular politician, credited with providing them security, from criminal accountability.

In all these cases, Jews believe that autocracy can protect their safety better than liberal democracy. They are wrong.

The Jewish argument for dictatorship rests on a truth: antisemitism is widespread. From that truth, the argument falls into error: isn’t it easier to convince one person — the autocrat — to protect Jews than to convince millions — the people?

What this calculation ignores is that the autocrat’s power is a double-edged sword; if one man can decree tolerance for Jews, then one man can decree persecution.  And eventually, they usually do. Virtually all totalitarian regimes ended up persecuting Jews. By contrast, no liberal democracy ever took this trajectory.

That is not to say that anti-Jewish actions disappeared whenever a country adopted liberalism, but since the advent of liberal democracy—with all its safeguards, norms, and institutions—antisemitism could never have the force of law behind it.

Consider the Dreyfus Affair, which many people consider an example that democracy didn’t eliminate state antisemitism. In fact, the Dreyfus affair proves the opposite—the self-correcting mechanisms of democracy. True, people in the French army and government framed Dreyfus. But thanks to a free press, Emile Zola wrote his “J’accuse”; Parliament intervened; the case was reopened and  eventually, Dreyfus was acquitted and reinstated.

Antisemitic candidates sometimes win democratic elections; Karl Lueger, who became mayor of Vienna at the turn of the 20th century, is a famous example. Lueger managed to exclude some Jews from his administration, but in the end he couldn’t enact a single piece of anti-Jewish legislation, and during his tenure Viennese Jews prospered. The checks and balances of Viennese democracy never allowed Lueger’s vitriol to become more than rhetoric.

Hitler learned this lesson well. Before the actual persecution of Jews could commence, the Nazis first needed to (and did) thoroughly dismantle the democratic institutions of the Weimar Republic.

This centrality of institutions is why Jews would be wrong to prefer a friendly autocrat to an unfriendly government under a liberal democratic regime, if that were the choice they faced.

It’s also, by extension, why Jews shouldn’t be so quick to give some rising autocrats a pass just because they present themselves as being “pro-Israel”.

Autocrats’ pro-Israel rhetoric is often a fig leaf for antisemitism at home. Hungary’s Viktor Orban may like Israel (as Bari Weiss has said, for all the wrong reasons) but he has also vilified the local Hungarian Jewish community. The generals in Argentina, too, were firmly pro-Israel, even as local Jews were persecuted and killed.

But even if and when this isn’t the case, it doesn’t actually matter whether an autocrat is personally antisemitic. Either way, undermining democracy’s liberal safeguards structurally undermines future Jewish safety. Today’s dictator might genuinely like Jews; so what? After he destroys democratic institutions, what happens if (when) his successors turn against us?

It shouldn’t be necessary , for Jews or anyone, to argue anew for liberal democracy. No other system has yielded so much freedom, safety, and prosperity.

Liberal democracy has not always lived up to its principles. American liberal democracy brutally oppressed Indians and African Americans, for example. Democracy does not magically make people just and decent. But once liberal democratic principles are accepted, sooner or later the logic of the system becomes inescapable, a “promissory note to which every American was to fall heir”, as Martin Luther King, Jr. said.

But that’s not a bug, it’s a feature.  Liberal democracy, with its compromises and power sharing and managed conflicts, accepts its imperfections and works nonetheless to improve people’s lives. Liberal democracies don’t believe in total, permanent solutions. Utopian regimes, meanwhile, always end up in brutal tragedy. That’s only logical; for the sake of a truly perfect society, what is a few million individual deaths here or there? As Stalin reportedly said, that’s “just statistics”.

As the people associated with perhaps the most famous “statistic” in world history—Six Million—Jews have a vital stake in the health of liberal democracy.

John Adams noted that “There never was a democracy yet that did not commit suicide.” Today, liberal democracy is again flirting with suicidal thoughts.

We Jews need to be unapologetic and passionate in our defense of democracy: the best hope for societal progress, the best habitat for every community’s flourishing, and the best protector of minority rights. Yes, maybe modern liberalism is aligned with Jewish values, but mostly, it’s aligned with unprecedented safety, wellbeing, and freedom for Jews.

For us, and others, democracy is a matter of survival.